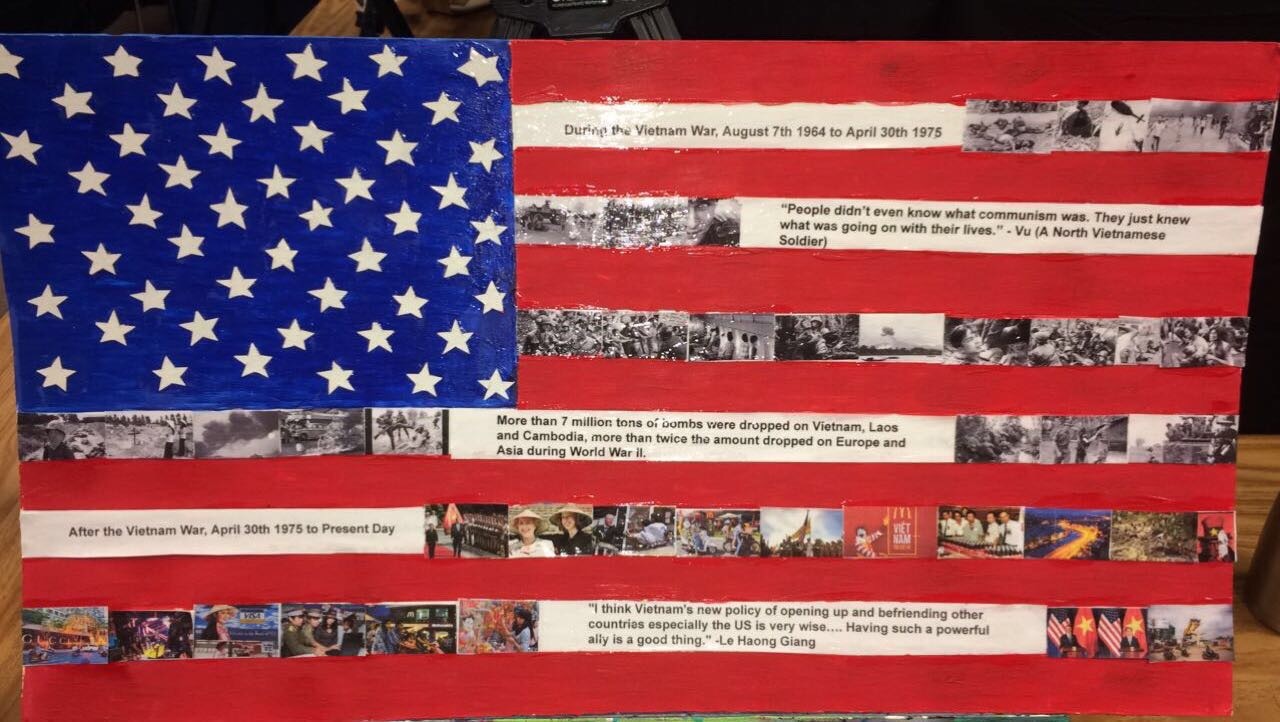 The American War: The Vietnamese Perspective
Amaya Holliday
Acrylic Paint and Collage on Foam Board
April 2017
My work shows the perspective of the Vietnamese people over time towards America. The white stripes on the flag are collaged with images of the brutality and reconciliation during and after the Vietnam War. In Vietnam they call it the American War, which is why I made my art piece into the American flag.

I used a foam board as my canvas because I needed something I could cut into the exact dimensions of the American flag. I measured and calculated the dimensions and then drew them on the foam board. I painted the flag blue and red: I filled the white stripes with quotes and images from during and after the Vietnam War. I found all the images on the internet and cited them in a separate document (available on my DP). Afterwards, I arranged the images chronologically, to the best of my ability. I used the timeline structure to show the effects of during and after the war. Then, I cut out fifty white stars using a stencil I made from white painted paperboard. Next, I Mod Podged the stars on the blue section of my flag.  Lastly, I listened to my peers during a critique and Mod Podged the entire piece to add a consistent gloss effect.

While making this piece, I learned the brutality the Vietnamese people faced during the war and how only a few decades later they are excited to redefine their relationship with the US. I am amazed by the Vietnamese people’s forgiveness. In this piece I am trying to convey the immense tragedy the Vietnamese people experienced and how they have quickly moved on. These images bring out the truth of the war because they are primary sources, meaning they show first hand actions of the war . The intensity of these images shows what the Vietnamese saw in the Vietnam War era, and how their perspective was shaped and has changed.
​
Project Reflection:
​
For this project, my class and I studied the truth of war. We started this project by studying the Cold War and the American battle with the spread of communism. We did this by using simulation games, note taking, and writing a variety of mini-essays. After we got an understanding of communism we started to learn about how that lead us into our war with Vietnam. My class and I learned about this by reading the book The Things They Carried by Tim O'Brien and using research packets to write essays like our Gulf of Tonkin timed write. To prepare for the timed write we used a research packet full of telegrams, memos, and resolutions about the Gulf of Tonkin Incident to make an outline. Then, we brought the outline with us for the timed essay. We started project work time by having a Vietnam Veterans come into our class and speak with us about his experience. From his interview, I came up with my idea for the project. I wanted to learn about the Vietnamese People’s perspective. From this, I came up with my idea to create a timeline using the American flag.

I strengthened my timed writing skills. I did so well on this essay because I wrote an excellent outline. I was very nervous and stressed about being able to finish the essay in the time constraint. I realized I could use an outline to solve this. In my outline, I wrote every piece of evidence I needed and a summary of the analysis as well. This helped me so much because I did not have to worry about the time when I was writing. I could just simply expand on the ideas I already found. Additionally, I was so prepared for this essay I was able to do a challenge extension and write four body paragraphs compared to the required three.

I will take away from this project a greater understanding of the Vietnam War and the truth of war. Before this project, the only thing I knew about the Vietnam War was my Uncle Mike was in it. After this project, I now know why and how America fought in Vietnam, and how this war affects the world today. In class we learned about how the Vietnam War impacted everything from music, like Creedence Clearwater’s It Ain’t Me to we treat veterans today. I am very appreciative my teacher taught us this project because I also, now have a greater understanding of the truth of war. Through the personal accounts of veteran guest speakers, I gained a better understanding of how everyone’s experience in war is different. For example, the first guest speaker signed up for the navy and was in charge of shipping supplies in Vietnam. He saw little combat, yet he saw the detrimental impact of drugs on his fellow soldiers. The other guest speaker was a foot soldier and experience extreme trauma. Furthermore, when I researched the Vietnamese perspective, I came across the horrifying ways they were treated. All in all, I now realize the truth of war belongs to the victims and offenders and their diverse experiences. Nobody will ever have the same truth of war because had a different version of that war.

Bibliographies by Amaya on Scribd